Ok that was stupid of me to say I’ve won on the river that you can count on one hand yes it’s more than that but it’s like someone turns on and off bad beat mode like for example every time I play in the Deep & Slow 50k tournament it seems like legit poker don’t get too many bad beats and when that doesn’t happen I’m fairly good I usually make it to the money or win the whole thing. But when I play these 15k or 5k ones just as well not try because the bad beats are going to hit I never have the nuts and my opponent practically always beats me out of any big pot I mean I make take down a few small ones but as far as winning the tournament it’s just harder to me than live poker is which is not easy. I guarantee though for every 1 time I win on the river my opponent wins 20-25 times I mean it’s not even close. I haven’t won on the river at all lately, not in weeks maybe not since that tournament I played against you I don’t know but it’s been awhile. Yeah you’re right in that tournament I wasn’t getting bad beats every once in awhile it feels like normal poker and don’t tell me “well that’s just poker” no it’s nothing like real cards.

I notice when I’m folded and out of the blind with a crap hand I’ll hit like a boat or flush or straight but when I’m in the blinds big nothing practically ever. And it doesn’t matter if I have pocket Aces my opponent will crack them if I have Kings Ace comes out on the board.

I have no incentive to lie about any of this and I’m not wrong, that’s all there is to it.

Like me and wildpokerdude talk about there was this guy on youtube named magic612 who made like 200 videos showing constant bad beats on pokerstars I mean if you spend time watching you would have a hard time denying all the bs and it’s the same broken algorhythm on any site it’s all rigged for action he folded pocket Aces preflop because he knew he was going to lose and sure enough he would have. Same as pokerstars Replay just suckers you in you flop two pair you may as well fold them because way more than you should you’re going to lose.

I don’t even remember flopping like a nut flush ever on here but if I have Queen Jack of clubs and 3 clubs on the flop guess what my opponent has Ace 8 of clubs. It’s all a joke and people out there that work for these sites know it but they lie to you.

You got these people defending this site that don’t care nothing about you same with celebrities or politicians you don’t know these people stop kissing their ass because they don’t care about you. At least replays play money but then again I saw somebody say he spends $250 a month on this site so they’re not any better than the other sites they just want your money it’s always about the money in life no matter what people sell their souls.

I’m over the target so people are going to hate me on this site but I call it right down the middle I’m not a sore loser I got 2 million in chips earned since July I’ll be honest not even close to my first account I’ve been opening and closing accounts for 8 years and nothing really ever changes it’s just constant bad beats close my account my urge to play poker and the multi table tournaments which I love comes back yes I love everything about replay except the poker the lay out of the site is great the multi table tournaments are the best but the poker is crap.

Just for the record, I never said I thought you were lying.

I just think that your memory of the frequencies doesn’t match the reality.

And maybe it does. I only played 1 SnG with you. I didn’t see anything I would consider even a little out of line with what one would expect. But it was only 1 SnG.

Exactly it was only 1 SNG and like i said there’s times when it feels like normal poker but when bad beat mode is on I can play 10 tournaments in a row and the constant bad beats are coming and I can have pocket Aces and my opponent 9 2 on the flop I’m good I’m usually winning on the flop if the game ended with 3 cards I’d probably have a billion chips but oh look a 2 on the turn I’m good oh look another 2 on the river and I know bad beats happen in poker theoretically nothing I can say could not happen in live poker but the math doesn’t even close to adding up. The river is supposed to be a card like any other card but it’s not here someone programmed for action.

@Jayinem2022
Behind after the flop, Improved on both turn and river.

Thats not repeating the same hand 10,000 is it?.
The reason for 10,000 consecutive hands is pretty simple. There are 1326 possible different starting hands so analysing 10,000 consecutive provides opportunity for true randomness to present itself.

Edit:… Had a look at your hand history and can’t find a run of KK losing to JJ. Seen it once in a Bankroll builder tournament…

Interesting that you would call the idea of counting and getting truly accurate numbers to confirm or deny a hypothesis “second guessing.”

Here, let me fix it for you:

“Elvoid said he thought he was seeing an inordinate amount of underdog hands winning, so he decided to actually start counting the wins/losses of underdogs vs. favorites. Once he actually started recording data on the subject, he found the favorites winning the vast majority of the time, which was the exact opposite of what he thought he had been seeing.”

(Incidentally, I’m still counting, and right now the count is 72 counted “all-ins,” and the count is 54 favorites winning, 18 underdogs winning)

his vids are great. watch his vids all time. he has 3 vids alone of when he gets dealt KK and ace on board everytime

losing all my chips. sick of it

No doubt about being rigged. I just witnessed a 4-A’s hand, and straight flush, back to back, same player. Then I got 4-9’s couple of hands later. Give me a break! I have been as high as 260M and lost it all to this fair and square site.

are you also offended by the hands you win?

should had posted the hands for all to see.

Is this the 4 ace hand you mention?. If so, I don’t see any of the other hands you mention. There isn’t a straight flush either side of it and I cannot find a quad 9s hand. Can you please have a look in your hand history and provide hand numbers.

Another player did, and it did happen.

My mistake it was like 3 or 4 hands later, you look again.

I did. Still not there. Please show hand numbers

I went ahead about 5 hands and there it was, then you see the quad 9’s I got. Real world huh.

Show the hand number. I looked thru several hands and don’t see the one you’re referring to.

Quads in that frequency just never, never, ever, ever happen in the real world.

That makes the computer animation in the video below truly amazing because it almost had me fooled!! 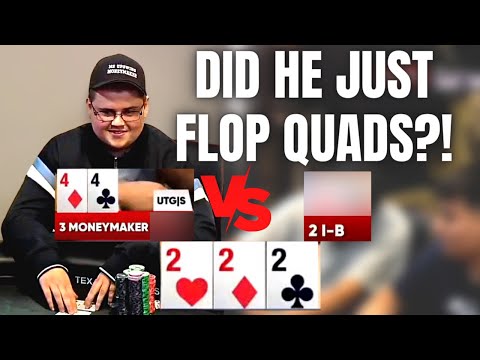 Then there’s this one where the “player” actually gets quads back to back!!!

You’d think they’d at least have changed the animation of the players and table a bit more - they’re getting lazy.

(Start at the seven minute mark to save yourself some time) 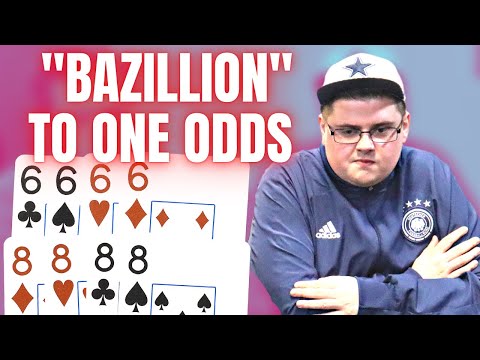