How many would had called here?

thought his preflop raise was weak and to small. he got mad cause his QQ lost. told him if he had raised more preflop that I would’ve folded.

With Ace out probably would not call with such a large bet and coming from you.

I just meant preflop. should had worded it better

he got mad cause his QQ lost.

Calling the preflop raise? Why not? Like you said, 120 not too daunting - one of those you just might take a flyer on for the heck of it. Believe me - he can complain all he wants, but he was happy when you called - heck, he probably would not have minded if you raised.

After the flop? Well, in for a penny, in for a pound, right? Again, 240 to take a look at an open ended straight? Heck, why not?

Real money, this gets tougher… maybe, maybe not - depends on one’s tolerance, I guess… but here?

If he did complain, it was probably because you called preflop and post flop raises with 4,5 os.

I just made a comment in another thread about players chasing open ended str8’s. It’s almost impossible to push people off hands on here. In this case, you just got lucky.

I think his mistake was not raising to 1k Post Flop. After all, he was willing to raise that amount (240 Post Flop + 720 Turn) after the Turn.

Maybe, you can tell us and give me some insight on why you called both raises with that hand?

Maybe, you can tell us and give me some insight on why you called both raises with that hand?

I called preflop cause it was small raise and why not? if I fop anything then I can be looking to trap. if I missed on flop then its a easy fold… the flop gave me open end straight draw, so why not see turn card. turn hits my straight so was way easier to call on turn. he checked the river giving me reason my straight was good. I made bet I did on river.

His mistake was his betting size with two pair after the flop.

The pre-flop raise with QQ from the small blind to 3 big blinds seems pretty normal to me. 54 off is a standard fold, but it’s not really likely to be hugely minus EV, and if you think your opponent is likely to stack off a lot when you connect strongly with the board, then the call can certainly be profitable against that type of player.

On the flop, the pot sized bet on a board of 322 rainbow is probably reasonably fine. I’d normally be inclined to bet a little smaller, as it won’t connect with very much of the big blind’s range, and you don’t have a nut advantage here. On the other side, QQ does feel some need for protection, being worried about any ace or king.

The pot sized bet on the turn with a board of 322A seems like a mistake to me. I have to think you’re losing to the calling range here against most opponents.

On the river, I think QQ has a pretty easy fold to a pot sized bet here, except against the most bluff heavy of opponents, and this seems to me like a case of falling in love with your hand pre-flop, and not really re-evaluating how strong your hand is after each street.

The pre-flop raise with QQ from the small blind to 3 big blinds seems pretty normal to me. 54 off is a standard fold

Hmmm… just looked this up on Jonathan Little’s site, and was surprised to see that in SB vs BB 54o is a 100% call for the big blind. Still, I think on this site raising ranges are much stronger than what you’ll get from a solver, and so in general I think you’ll usually want to be a bit tighter with your calls. 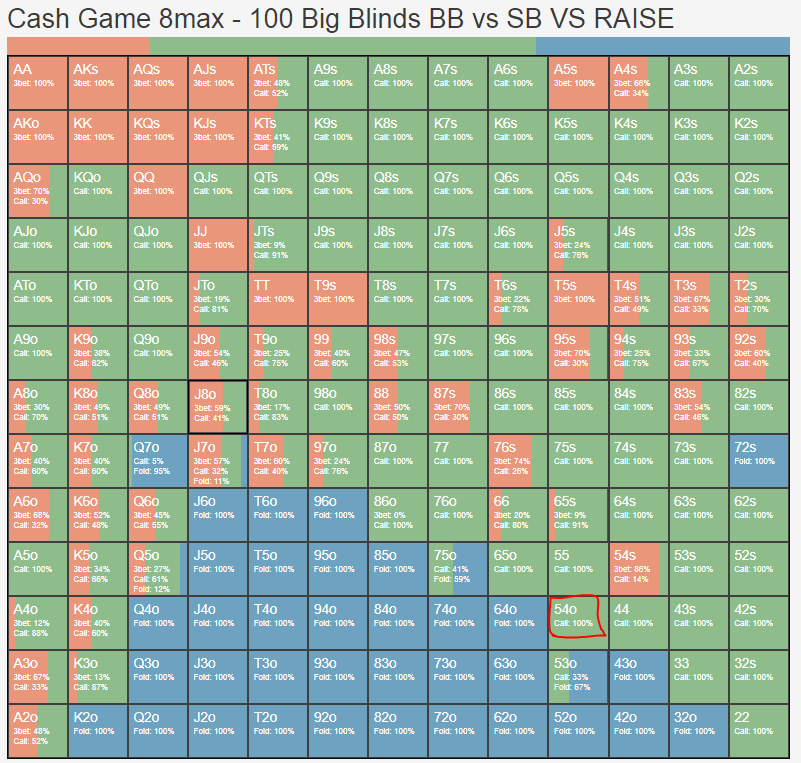 Why not? BB vs SB you only need to call 2 BBs with a 117BB stack behind. Pretty sure he was happy when you called, not like he only wanted to win a 1BB net with pocket Queens. Of course making a huge preflop raise to win 1BB would have been stupid too so I kinda think he was stuck in that play. Real question is what was he thinking calling a Pot sized River bet after you called pot sized raises pre flop, flop, and turn.

I have a question here,

He faced a big bet ( pot size bet) on the flop with an open-ended straight draw.

He is getting wrong price to call with a draw right?

When someone bets full pot it means that you are getting 2:1 on a call there (pot odds) and with his draw he needs 4.8:1 to make it profitable. He had 8 outs in total and it was a paired board, meaning that if Kile got lucky and caught a Q he would have had a full house and it would have been nearly impossible not to lose your entire stack if you complete your straight?

To me it seems like he should have folded on the flop to avoid difficult situation but who knows, you will miss your draw more often than you hit. And it is unlikely that you can turn your busted draw into a bluff and expect it to work against any remotely decent player here

You are correct that he didn’t have the direct odds to make the call, but there are direct odds and then there are also implied odds. Against an all in bet, you only need to think about the direct odds (and perhaps your equity against villain’s full range). When deeper stacked, you need to consider the average amount you will be paid when you do hit your draw, and it is that average win amount versus the price you are currently paying that determines if a call is likely to be profitable. Of course, you don’t really know the average amount you will be paid when you hit, and so calculating implied odds is more difficult than calculating direct odds.

You do raise a good point about the paired board. This does increase the chance that he might hit his draw and still lose the hand. Essentially, this is decreasing the average winnings when you hit, by adding in some gigantic losses.

I think it is not necessarily wrong to fold in that spot, but given that he did nearly stack the player with QQ when he hit, even with an ace on the board, it seems his implied odds were probably good enough to justify the call on the flop.

it seems like he should have folded on the flop (esp., 4,5 os I would’ve folded Pre flop to any raise) to avoid difficult situation but who knows, you will miss your draw more often than you hit. And it is unlikely that you can turn your busted draw into a bluff and expect it to work against any remotely decent player here

I agree with you. I’m not a GTO player but, this is the way I see it.

But again if you call there sometimes your opponent might slow down and check the turn and you can take down the pot because it is not much likely that he has a lot on that board, especially if you know that your opponent frequently makes a c-bet when he missed the board.

There are many ways to describe implied odds.

One of the easiest ways is to know if i hit my straight, is it going to be a super obvious straight with 4 card connected to each other, like 3456Q board. Every fool can notice that any 2 and any 7 is a straight here but 2 is apparently ,The baby end, where we would not be that confident that we have the best hand every time.

Same thing works for flush draw if i hit it there are going to be 4 flush card and it is unlikely that i will get paid unless my opponent has a big flish with a K,Q,J or maybe a 10.

This is my favorite site but there are many others:

Implied odds are a very useful extension of pot odds that will help you to make more profitable decisions with drawing hands. Use this guide to help you learn how to use implied odds.

Hey man, with the range that you provided. what hands does the solver say to continue on that board (flop) with a pot size bet from SB. I have an idea but would love to see what a solver exactly says.

Excellent analysis. Thank you for saving me the effort of dictating exactly the same thing.

This looks like one of the tournaments that I play in.

It is in the very early stages with deep stacks. With QQ in the small blind, and folded to me, I would just limp in hoping to hit a good flop and trap. Raising to 3 BBs in the hope of instantly winning a tiny pot has little purpose. As soon as BB calls, you are playing from out of position.

On the other side, I would not call here with 34o, the reason being that even if you hit one pair on the flop, your hand is still pretty useless if there are over cards, or you are up against a pocket pair.

The odds of flopping two pairs, trips, or a good draw or even less and you are being required to put in 80 chips for a shot at a pot that contains 160 chips. Does not seem like good enough odds to me.

I find in these tournaments it is nearly always best to play very tight when the blinds are low and the stacks deep, otherwise you are likely to fritter away your starting stack. Better to wait for stronger hands and look for chances to double up when the blinds get up to 200 and 300 and you can get opponents pot committed.

I don’t always win these tournaments, and I don’t always play well in the final stages, but I nearly always complete the first hour with a decent size stack. If you have a stack of double what you started with at the end of the first hour, you are in good shape, and if you get reasonable luck, you will often stack somebody who gets over aggressive and will have an even bigger stack.

Hey man, with the range that you provided. what hands does the solver say to continue on that board (flop) with a pot size bet from SB. I have an idea but would love to see what a solver exactly says.

I’d love to know the same thing, but unfortunately have never actually purchased a solver.

oh, yeah no worries man. at least we still know what to do in this spot.