Would you fold kings here? 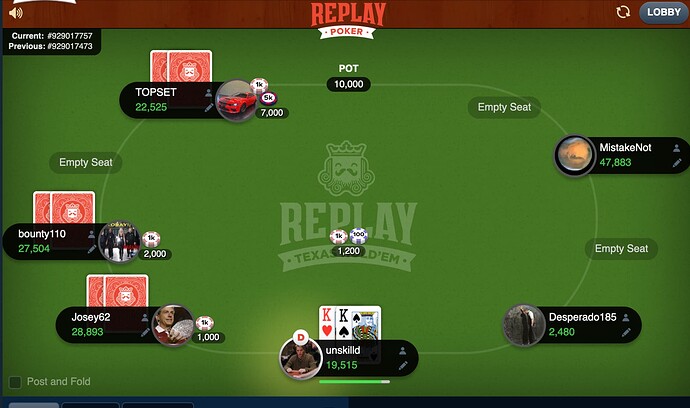 Late in a tournament
On the stone bubble
6 handed, on the button
~1bb short stack on my right
UTG open (3.5bb, large for late tournament)
Folds to me
Look down at KK
UTG has been playing mostly tight

Depends. Since this is for play money, you could reraise all in and put yourself in a very strong position if you win this hand by the opponent folding. The biggest danger is that he has Ax. Against Ace King or any pair other than AA, you are a hot favorite.

On the other hand, one player on the table is down to just over one big blind, and if you want to sneak into the money, you could just fold this hand to see what happens.

But really, you are not going to win tournaments by folding KK preflop. Another compromise would be to just flat call, hoping that the blinds do not try a squeeze play, then see what the flop brings. Your worst nightmare is that there is no Ace on the flop, but your opponent shoves on the flop with a set.

If the opponent bets half the pot on the flop, I would suspect that he would like to see another card, so I would reraise all-in

The interesting thing here is that opponent is a little cagey, I think. He could have shoved if his main motive was to take the blinds down, but he seems to have made his bet small enough to be able to fold to a large three bet. My suspicion is that he does not have AA.

It’s easy to look back after he shows AA and say I should have folded, but hard to say you didn’t make the right move. Shoving puts him in the same spot you are in for anything other than AA.

when on, or near the bubble maybe very maybe ill fold, otherwise insta shove

with a flat call here, a cbet basically puts you all in anyway

Going all in with KK there seems like a no-brainer. You’re going to be up against AA less than 1 time in 50 (3 players left to act, plus a small bunching effect from the prior folds). I have to think that the chips you win from calls from lower pairs and Ax hands makes up for your losses here, even with ICM considerations.

If there was ever a time that I could imagine folding kings it would be here. Given it’s the stone bubble, a tight player opens UTG and there is a micro stack on my right. But it seems like the consensus is a strong no. Thanks for the responses guys.

Honestly, when I looked at it initially, somehow I thought he had called, rather than making a first position open raise. That certainly increases your risk of being against aces, but I’m still pretty sure I’d normally just shove KK here without even thinking.

But if the player is tight enough, it can be a fold. I’ve had a few players I never saw raise with anything but pocket aces, and honestly, if you think he would only raise with QQ+ or even JJ+, in this spot, on the bubble, with a player that covers you, it might be a fold. But if TT, AK and AQs even are reasonably in the mix… you just have such a big edge against everything but exactly AA.