Why I suck in poker and smart people don't

plus the much more important issue “Effective Altruism”

Liv is one sharp lady. Right up there with Vanessa Selbst in terms of top female players. Another up and comer may be Samantha Abernathy (feel player more than technical), who runs some of the wildest cash game lines and bluffs I have ever seen. Its true that almost every player today has a GTO base but its how they deviate off this that makes for the really great hands and plays.

Anywhoot, I enjoyed her comments on how play-chip online games can still be great businesses, modeling off the Candy Crush type games. I wonder if Replay Poker has considered “add-ons” or whether they will continue to simply offer chips as their revenue source?

The great unasked question regarding AI is “will artificial intelligence ever be able to cope with natural stupidity?” In all honesty, the AI programs being developed for poker are close to being able to beat their human counterparts. Maybe another few years and we’re there. How will any online poker site, for cash or play, be able to exist once these programs are available?

Very interesting video, thanks for sharing it!

How will any online poker site, for cash or play, be able to exist once these programs are available?

By developing algorithms that detect and ban suspiciously perfect play. For example, they could ban anyone with a “too high” ROI.

Wouldn’t this also ban the very best human players too?

Yes, but that’s probably good for the game anyway. The new wave of GTO/ICM players are already affecting the action at some live poker rooms. The more casual players, who make up the bulk of their customers, are tired of losing week after week to this new breed of math intensive pro.

As the casual players go elsewhere, the GTO guys end up playing themselves. Since nobody has an edge in that type of game, they can’t cover the rake and nobody wins, at least not long term. This trend is self-regulating, at least to some extent.

However, no poker room or poker site can really afford to cater to the 1% at the expense of losing the 80%-90% represented by the casual to advanced casual-type player… it’s just bad business.

Identifying and eliminating AI and “perfect” players will become critical to the game in the near future. Venues that can’t or won’t do this will eventually fail.

We are living in “interesting times” for sure. If there is money involved, both sides will come up with ever increasingly sophisticated ways to beat the system. The AI guys will look for ways to dump enough hands to come in just under the maximum ROI barrier set by the game hosts. Then the hosts will come up with another metric and so on. Its going to be a challenge but if there is significant money at play, you can bet its not going to be easy to keep the programs off the tables, at least online.

We had a somewhat similar issue in securities trading with the high-speed traders. Not quite the same but close enough in that there is a ton of money involved and both sides keep trying to exploit/deny advantages. That war is far from over and I assume the coming one with poker will be as fiercely contested.

I believe the next iteration of players and theory are already here though. Almost every top pro from the new generation can play GTO poker. The departures from that perfect approach is where the most thought is being given right now, from what I can see. Its simply another level being added to the game. Decisions on how to get the very thinnest of value from hands are becoming more and more important and so on.

Fortunately for casinos and for most recreational players, the number of top players is exceedingly small and is likely to stay that way as far as I can see. No one who is not doing this for a living is going to put the time in to learn perfect game theory poker or anything close to it. Most people will continue to play “basic” poker online and live and most live players will still base a lot of their play on feel and human reads. At least this is my best guess of where we are headed. So, maybe the gap between pro and non-pro will widen but I still think there will be plenty of room for the 99%+ of us to play and enjoy and even make a little money, at least live and online where money is not at stake.

It will get diabolical!

There would eventually be a GTO “solution” to the ROI Cap problem.

Consider an AI that not only dumps chips, but dumps them to a specific player in order to inflate that player’s ROI. The ultimate AI would win most sessions but never be the big winner.

What about an AI that keeps track of session winners and makes sure everyone wins in his or her turn, while ensuring it takes a modest profit every session?

I really like the way your mind works! I think you have it exactly right here. Its going to be an online arms race as long as there is money to be made.

You see SunPowerGuru, the crux is all about a form of “big data”. Just as most humans don’t have an Idetic ( like SheldonCooper, I hope thats right ) memory, Data from StarTrek remembers everything. No matter how much I vary my play, a computer will still be able to sniff out my patterns.

Yes ultimately, only a AI can catch another AI. If Watson can play Jeapordy, it should be able to play Poker… Personally I want some of that tech, 'cause with it and the right algorythems I think even things like PowerBall can be cracked.

Ohh and an AI, won’t get emotional ( hopefully ) about those nasty bad beats… its all math to a AI.

Probably the most cutting edge programs are Claudico and Slumbot and as of the last test, the humans still beat them. The learning curve is pretty steep but with this much computing power, it wont be long before Claudico or some other program can beat the best humans. It happened with chess and, as you said, with Jeopardy already.

For poker, the programs are using an equilibrium finding method called CFR (counterfactual regret minimization). For anyone who wants to read about the 2016 AI competition, here is a good read: 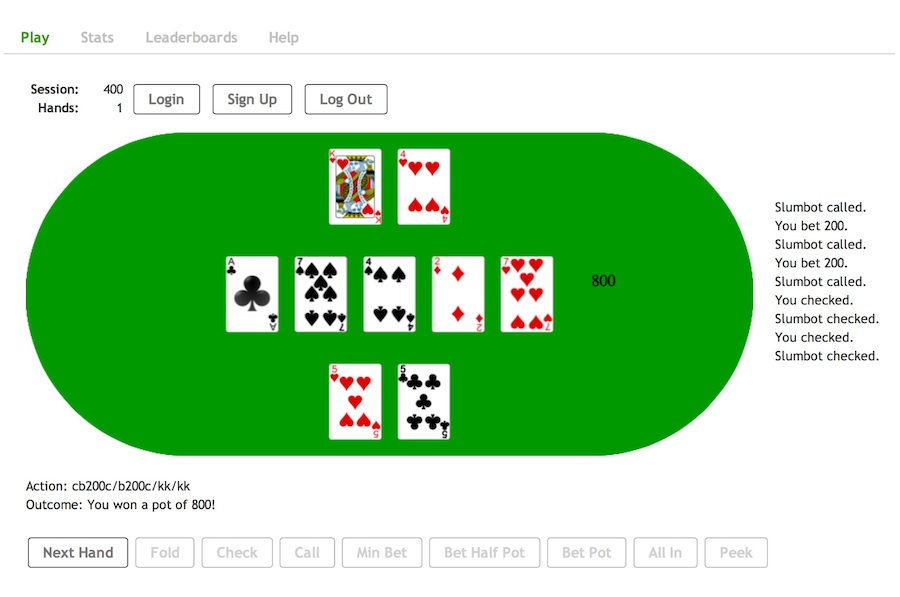 Poker and AI: Reporting from the 2016 Annual Computer Poker Competition

Nikolai Yakovenko reports on the 2016 AAAI Conference on Artificial Intelligence and his entry in the 2016 Annual Computer Poker Competition.

Frankly, what is going on here scares and fascinates me at the same time. When you start talking about not only how to play the hand but optimal bet sizing as well, you are getting very very close to perfecting the program.

Frankly, what is going on here scares and fascinates me at the same time. When you start talking about not only how to play the hand but optimal bet sizing as well, you are getting very very close to perfecting the program.

Now maybee chess and jeapordy aren’t the right analogy… perhaps lets take trading stocks, where to a certain point it is all just math… but then allowing the algorythem to track each trader and how they trade, weaknesses, habits… I bet you could skew it just enough to always turn a profit, especially if you have it seek out the most profitable “marks” it can find. Obviously just like a casino, you would be looking at the long game for max profit. As we all know if you play long enough at casino table games/slots, you will lose. ( maybe thats why we play poker !!! and always against human opponents… or are they )

At some point in the future, it will be possible to develop a simulation of the entire universe and all it contains. Advanced computers will be powerful enough to render this simulation in real time, and in resolutions so high it would be indistinguishable from reality. This future civilization could also develop a historical simulation of our current time.

We might be living in that simulation right now.

It sounds ridiculous, I know, but many of the world’s top physicists are convinced this might, in fact, be the case, and are trying to find a way to prove or disprove the idea.

Experiments in quantum physics have demonstrated that matter doesn’t exist unless it’s being observed. The underlying math behind the observable universe has been shown to be written in a very specific computer language. Not “seems to be” not, “might be,” but IS written in computer code.

There’s a pretty good chance that WE are AI. Wrap yer head around that!

Computers cannot handle human mad bets or crazy play.They work on logic and we work on how much beer.

Did we just step into a Hitchhikers Guide to the Galaxy reference? Yipes. From Oxford to the BBC in 12 posts. For those who do not get the reference, this is another must read book.

[Seven and a half million years later… Fook and Lunkwill are long gone, but their descendants continue what they started]

“We are the ones who will hear,” said Phouchg, “the answer to the great question of Life…!”
“The Universe…!” said Loonquawl.
“And Everything…!”
“Shhh,” said Loonquawl with a slight gesture. “I think Deep Thought is preparing to speak!”
There was a moment’s expectant pause while panels slowly came to life on the front of the console. Lights flashed on and off experimentally and settled down into a businesslike pattern. A soft low hum came from the communication channel.

Just thought about it and wouldn’t it have been great if the answer was 7-2 instead of 42?

Warlock, Sassy, and Sun you guys and gals are high wire acts for sure and really enjoy all of the comments, but can one of you well edimucated people tell me why the old mule stays so fer up in that fer, fer hope to see you on the felt