Tournament Points - something odd is going on

OK - before I can describe the odd occurrences the past few nights, it’s necessary to explain how things normally work - specifically in regards to how tournament points are awarded to players who bust out early, during Late Registration.

Tournament Points are awarded on the spot. So let’s say a 5k buy in tourney starts with 10 players and someone busts right away. That player is awarded points for 10th place out of 10 players. Using the Replay Tournament Points algorithm, that player earns 8356 points. Now, let’s say 40 more players join the tournament before the next player is eliminated. That player receives points for 49th out of 50, which calculates to 4747 points.

The list of players in the tournament lobby are ranked by tournament points earned, not the sequence of elimination. So the player who went out 10th of 10 will be listed above the player who was 49th of 50. In fact, “10th of 10” will keep rising up the list for a while, until someone earns more than 8356 points. Usually it doesn’t last too long and the name stops rising up the list about half-way through the tournament.

OK - the past two nights in the Oceanic Wave, a player has gone out very early and somehow earned more points than they should. Their names continued to rise up the list well into the Final Table. Those of us who pay a lot of attention to the leaderboards quickly noticed something unusual was happening. On the first night, a player in top contention for Oceanic somehow earned almost 14k points, having busted out in the first minutes of the tournament. It’s unclear how many players were seated when the hand started, so it’s difficult to calculate, but it couldn’t have been 14k points.

Last night, it happened again and I paid closer attention. A player named “blaster308” was eliminated with 7 players registered, 7th of 7 - which calculates to 7929 points, A total of 40 players registered and I made it to 8th place - which is 10,900 points, which is what I was awarded when the board updated. Yet, somehow “blaster308” earned more points, as their name is listed above my name in the lobby. 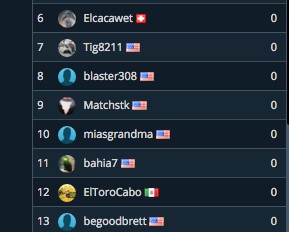 And when it happened the night before, with the player in high contention on the leaderboard, they clearly did earn those inflated points. There are three of us in a race for 2nd place - that player busted in the first minutes and the other two of us survived a long time, into the top 15 or so, yet the early bust out advanced ahead of us.

So, all this to say - something seems to have broken in the way Tournament Points are calculated for early bust outs. Somehow they are receiving extra points. Obviously, with players taking the boards seriously and trying to do their best, it’s disheartening to discover this - hopefully, Replay can look into this and fix the problem.

Thanks Replay, hope it gets figured out.

I told repaly 2 months ago about this. At the time they said the new it was a glitch but nothing they could do about it. Players know about it and it may explain why alot more players are playing bingo at the very start of tournys, trying to get a big lead or at least get a decent pts if they get knocked out already. But lets face it those players are not going to benifit in the long run with the 8000 pts.

Dont know whether this matters but where it describes a points are figured the next statement is…" Tournament points are only awarded to players who were present (not away) for at least 50% of the hands in their tournament. " so I dont know the player gets knocked out first hand many not receive his points any how. Replay would have to explain that also.

replay can fix this this. be done with late registration. problem solved.

My registration is always late. And I got 3 times 2nd place. Two times this morning. And I got no points at all :((
Royal poker 4:45h ET and 5:45h ET
That happends often to me