The trouble with trappers

I’m starting to assume every unknown player on this site is slow playing or trapping. It’s amazing how often I see plays like #911424742 at the so called “high stakes” tables. I don’t think people who play this way have any understanding of their reasons for doing this. They just want the thrill of feeling like they’ve outfoxed someone, even if it means making long term -EV plays. Now I have him marked as a trapper I adjust my play against him. Congratulations, the first one is free. 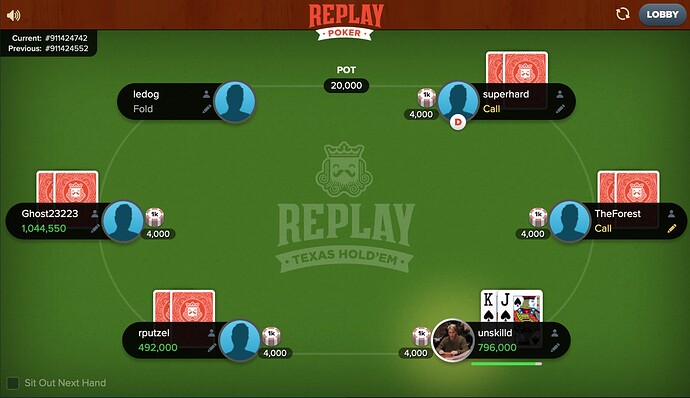 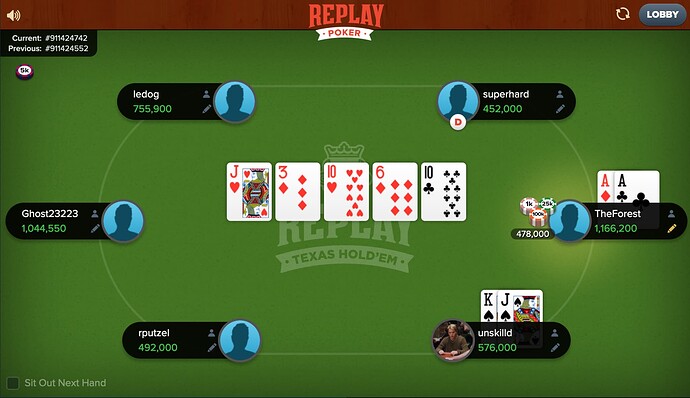 You marked him and he marked you. Nice pot. Of course you have to admit he did have the winning hand. To the victor goes the spoils.

Indeed. I was outplayed. He got me to value own myself on two streets because I made a decent hand on a wet board. But the scenarios where this can happen are slim. In most cases he might get one c-bet as a bluff out of me. He also risks taking aces 5 ways from the worst position which is asking for destruction.

Perhaps he did not reraise on the flop fearing that you had King King, given the raise to eight big blinds pre-flop. Also quite a lot of players on replay have a tendency to reraise all in on a flopped flush draw, so he was happy to flat call and wait to see if the flush draw came home. Perhaps he did not value bet on the river because he didn’t want you re-raising all in representing pocket kings and putting him to a tough decision.

In any case you have a tendency to raise to several big blinds pre-flop if you have two cards ten or higher and then re-raise all in on the flop with second or third best hand, so probably many of your opponents know this already.

Do you think he would have called if you had shoved the flop? I guess most people here would do so, and this looks like a ring game, but in tournaments I might or might not call, depending on relative stack sizes, what I have cooking on the stove, and other factors.

I would agree that in general limping from the big blind with AA is not a good move, because it gives you no information at all about opponent’s hand. However sometimes it has its place in the final stages of tournaments if you suspect that BB is likely to shove any two cards if you do not show aggression pre-flop.

fearing I had King King

Fearing? This would be a dream spot for him. 3 betting is almost mandatory if he put me on a big pair, since I’m almost certainly 4 betting and never folding. Though he couldn’t narrow my range in such a manner since I was incentive to squeeze with a wider range given all the dead money in the pot.

He might have read me for a LAG, which is correct to some degree and thus expected that I would raise behind him. Though he’s still taking a foolish risk because if I don’t raise his aces become trash after 5 players see the flop. He further increases his risk by not raising after BTN flat calls my raise.

Do you think he would have called if you had shoved the flop?

Good question. I don’t know what to expect from someone who thinks playing aces as he did is a good move. If I was forced to guess I would say yes, only because I believe such a player is not thinking about their opponents cards or what their opponent thinks of their cards. He probably thinks aces is simply indestructible and can’t wait to put all his chips in the middle.

He probably thinks aces is simply indestructible and can’t wait to put all his chips in the middle.

He did and did and walked away the winner.

I think the pre-flop plays taken here with AA drastically reduce average winnings. Completing as the small blind will usually just create a small, multi-player pot, both of which will reduce your earnings with AA. After your raise, if everyone else had folded, I can see trapping a small percentage of the time with a call, but with the button also calling, not raising is massively lower EV.

On the flop, I think the initial check OOP is probably fine, and I don’t think raising over your flop bet is completely mandatory, though it seems like the default line. The turn even more seems like it should be a check raise, given how much equity so many other hands have at this point against AA, and that there are probably enough weaker hands that call to make the raise straight forward value also. The fact that it checked through on the river makes me feel that value was lost, even with a pretty big pot won with the ultra-passive line taken.

Overall, I feel like the post flop passive play with AA was not quite as egregious as the pre-flop passivity.