“I must complain the cards are ill-shuffled till I have a good hand.” ~ Jonathan Swift

What makes you most suspicious of the quality of the shuffle? For me, it’s when AA comes to me (or anyone) two times in a row.

I seldom worry about the shuffle. What I pay much more attention to is the deal. Pay particular attention to the demonstrator’s hand and finger positions as he holds the deck dealing seconds. This is called “the mechanic’s grip.” The mechanic is, of course, the cheat who will deal the 2nd card, keeping the top card for his favored player–usually, but not always, himself. If you notice someone at your home or club game holding the deck this way, wonder about how often that player “got lucky.” When done skillfully, the only way to detect the 2nd being dealt is by the “swish” sound it makes from having pressure from the card above it. 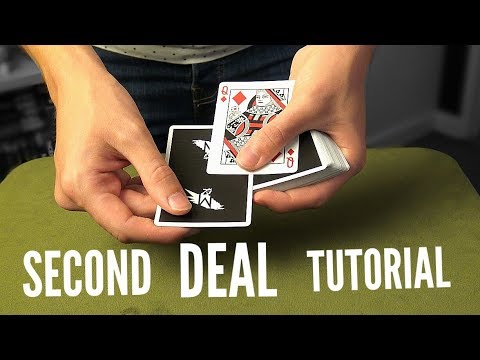 In a recent tournament, the French poker pro “ElkY” was dealt AA three times and QQ in a short span of hands. It was a televised event and a feature table, so anything suspicious would have been readily apparent to the pros. While there is a low likelihood of being dealt AA twice in a row (I bet you can count the times it happened to you on one hand), the only thing that you should feel at that moment is glee. You could see ElkY smiling on the inside as he expected that his competitors would be suspicious of his holdings that second time and third time around.

Great story! I know there’s nothing but a smile on my face when great whole cards pop up twice because I know no one at the table is going to suspect I got the same thing again already! Score!!

Yeah, there’s nothing worse than getting dealt half cards or quarter cards. The whole cards are the best!

I also like great hole cards, especially if they are whole.

I trust that the shuffle is fair, but nice of you to stir the pot a little!

You may think you’re being clever here, SPG, but in truth I really meant to write “whole cards” because I’m very accustomed, in this poverty-dense portion of the U.S., to playing with half a deck. And since we use half cards, there’s twice as many cards in toto, and twice as many of each of the cards (because top and bottom), which could explain why I seem so often to get high pairs twice in a row! It’s also harder to shuffle half cards than to shuffle whole cards, as you can well imagine, but we get by. (I assume since this is still April we can play April Fool’s Day just as well on the 8th as on the 1st of the month? I shall be the fool, if that’s okay with you, Mr. Hole Cards.)

The dealer dont like me right now,i know it will turn

But i wonder,this happends often,same guy,can be me or anyone they get great cards 3 or 4 times in a row why ? or more!

Sheer, dumb chance, Kondrad. The roulette wheel in Monte Carlo came up red 23 times in a row once. When enough tries are being made, odd things HAVE to show up. If they never do, then something is wrong. I have lost with a straight flush to a higher one in live play. It happens. That’s why we call it “gambling.”

There’s always Chess with every possible move visible at all times–and I still manage to lose some games. That happens, too.

I dont think about the deck being rigged much at all unless it is live play with my friends since they mess around sometimes, but here on replay it would take an insane amount of luck (good or bad) to make me question if its rigged. I am a firm believer that the reason people have downswings is when they have bad luck due to random chance (although how common they are and how bad downswings are can be contributed to how well the player is). I have definitely had my fair share of bad and good luck, and since I have played about 70,000 hands I am used to a lot of bad beats and lucky streaks at this point.

So I kind of lost track of it today, but after the fourth or fifth (I wish I had been counting) time getting pocket Aces - well, that was wild. All tournament play, not all at same table though some were at the same table and a couple were in quick succession. I mean it really got to the point where I’d get my cards and think “you gotta be kidding me. Should probably buy a lottery ticket tonight.”

I’m not in any way saying anything is “fixed,” not at all. But I honestly don’t know if I’ve had as many pocket Aces in the last two or three months as I had today. Weird.

Not complaining, mind you. I’ll take 'em as often as the game will give 'em.

About two weeks ago, I had quads (aces) twice in under 5 minutes.

I’m not a proponent of the “rigged” or “juiced” card dealer, either. It seems a preposterous idea. Nevertheless, I become frustrated with the shuffle in these circumstances:

But if AA comes to you twice in a row (this happened to me within the last week) what is the probability of them being the same two aces, for example both black aces both times? The probability would be three times greater, assuming that we take Ace of Clubs and Ace of Spades to be the same as Ace of Spades and Ace of Clubs., but even if with get the two black Aces, they may not be dealt in the same order, and of course you are not in the same seat on the next hand.

Recently in a tournament, I saw flops of AAK come down three times within the first 12 minutes, but the likelihood of them having been the same two aces and the same king dealt in the same order is infinitesimal. If that was the case, one might well doubt the shuffle.

I have often thought that it would be interesting if we had online poker tournaments like duplicate bridge, in which the players all play the same hands over the course of the tournament, and the winner is the couple who score the most points. However, this would soon lend itself to cheating in real poker with groups of players recording hands to get an advantage!