The General UFOs and Aliens Thread

I thin it might be interesting to have a thread dedicated to general UFO/Aliens stuff rather than sidetrack existing threads. For the record, I believe there is ample evidence for the existence of alien activity on our planet.

My Take on Roswell

To understand what happened at Roswell, we have to put it in historical context…

In the closing days of WWII, allied bomber groups were suffering horrendous losses, with some missions losing as many as 30% of their planes on a single mission. The US in particular was looking for better ways to deliver payloads to targets.

The German V2 rocket program was seen as a way to accomplish this goal, so we decided to capture some V2 rockets and as many of their scientists and engineers as we could.

The rockets were captured at the manufacturing and assembly base at Peenemünde, and over 100 rocket scientists surrendered rather than fall into Russian hands. These were all sent to the White Sands Proving Grounds in New Mexico. (now called the White Sands Missile Range)

Most of these captured missiles were missing their mechanical guidance systems. An American company was tasked with building these from the few examples we had, but this was always the weak link in the weapons system.

The secrecy and importance of the work done at White Sands can’t be overstated. The program eventually branched into 3 paths… the Nike series of anti-aircraft missiles, the Mercury space program, and our first ICBMs.

The V2 had an operational range of 250 miles. The launch facility is 70 miles from Roswell. The guidance systems were unreliable and the missiles launched could go anywhere. (There is documented evidence that one landed outside of Juarez Mexico, which is in a direction totally opposite the intended flight path)

White Sands had to have had a dedicated recovery team on standby. Stray missiles were recovered and analyzed to discover the points of failure. This was all above Top Secret.

What crashed in the desert outside of Roswell NM was almost certainly a V2 rocket.

Next month, a report ordered by the U.S. Senate Intelligence Committee detailing information about Unidentified Aerial Phenomena (UAP) is due to be published by a government task force.

Interest in the mysterious sightings of what are popularly referred to as “unidentified flying objects” or “UFOs” has surged in the past few years, particularly after the Department of Defense (DOD) officially released three unclassified videos showing UAPs in 2020.

The videos were captured by U.S. Navy fighter jets between 2004 and 2015. Known as FLIR, GOFAST and GIMBAL, the clips had been circulating in the public domain following unauthorized releases in 2007 and 2017, according to the DOD.

There’s ample evidence of unidentified objects in the sky that move in a way we can’t explain. Something is going and I don’t believe anyone knows what it is.

But this can’t count as proof of an extra terrestrial presence on earth. “Unidentified” doesn’t automatically mean aliens.

And I like your take on Roswell. I think it’s only widely known because of the initial reporting that a flying saucer was captured. Which of course there was no evidence of.

…objects in the sky that move in a way we can’t explain. But this can’t count as proof of an extra terrestrial presence on earth.

No, it’s not conclusive proof if taken in isolation, but it is evidence; it’s one piece of a complex puzzle.

I think it’s only widely known because of the initial reporting that a flying saucer was captured.

Yeah, the Public Information Officer of the local air base initially said that they had found a “flying saucer.” Why would he say that?

To understand why, we have to go back a few weeks before the Roswell incident.

In June of 1947, private pilot Kenneth Arnold reported seeing 9 “boomerang” shaped objects flying at what he estimated to be 1,200 mph, an unheard of speed in those days. They flew in formation, with a motion he described as that of a saucer skipping across water. “Saucer” described the motion, not the shape.

So when Lt. Walter Haut (Roswell’s PIO) was called to investigate the crash site at Roswell, what did he see? Well, he didn’t see anything he recognized as a plane. V2s don’t have conventional engines or props or a cockpit. They don’t have wings or horizontal or vertical stabilizers.

The missile would have hit hard, and the liquid fuel tanks probably ruptured. The thing had to have been badly crumpled up if not blown up. He probably saw a fairly large debris field, but he didn’t see anything he would identify as a plane. Since the Arnold story got a lot of press, he naturally assumed that he was looking at a crashed “flying saucer,” what else could it be? (in his mind)

They quickly retracted that story, of course. The problem with saying you found a crashed UFO is that people would want to see it, and you can’t show them your top secret missile!

Here’s the picture they released to “explain” it. Do you think ANYONE, let alone an Air Force Officer (Army Air Corp at the time) would mistake this for a flying saucer? I mean, come on man!

Disclaimer : The National UFO Reporting Center makes no claims as to the validity of the information in any of these reports. Obvious hoaxes have been omitted, however most reports have been posted exactly as received in the author’s own words.

We hope that this information will prove to be useful to the general public and the UFO community at large. We post reports on a periodic basis as they are processed through our database.

Here’s an interesting video from the International Space Station. The title is very misleading. Note the flash of the missile launch, and how the missile appears immediatly afterwards. This was NOT fired from the surface, it was fired from a launch platform in space. Small, fast missiles like that don’t carry enough fuel to reach space. 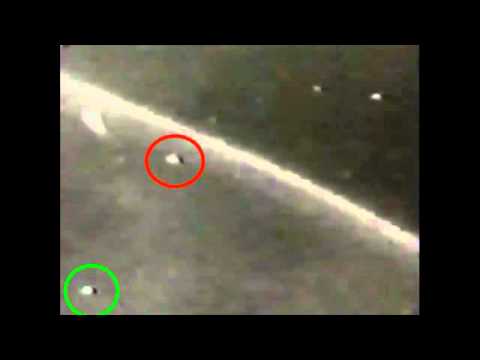 This looks more like the result of someone’s dog getting hold of a roll of aluminum foil than a downed extra terrestrial spacecraft.

I just received a text that the actor Dax Shepard had a great podcast last night about aliens. I’m looking for it now. If you find it post please.

Armchair Expert with Dax Shepard is available on Spotify.

Thank you my friend.

This might be the one you are looking for, posted 2 days ago…

That’s the one he meant. Looking forward to seeing it. Thank you

Whatever happened to the “full disclosure” that was required to happen by June 1 this year?

When My parents were dating in the 1950’s a Saucer hovered over Lake Michigan that My Mother and bystanders watched and collected the Spiderweb material that was being released by the craft. It left same way as most craft do when Hovering in one place for a long period. Shifts lil left then right then jus a streak… She mailed it to My Dad whom was an electronics engineer at time. Of course there was nothing in the envelopes when he opened them at the lab…When very Young I awoke for no reason and looked out window behind the bed and saw a smallish being with very wide bald head and tiny mouth and chin- felt no fear- went right back to sleep and still have the painting that I made soon after.

Whatever happened to the “full disclosure” that was required to happen by June 1 this year?

My sources tell me it will be released in a few months, but not to expect a full disclosure.

Yeah, should be interesting. They have lied so many times, nobody will believe anything they say though. Maybe that’s the point.

No harm in telling the truth if people will refuse to believe you anyway.

Space is vast! No aliens could ever get to earth, it’s just too far.

This is like saying our solar system is huge, so nobody from California could possibly visit New York.

Yes space is vast, but there are many stars within, say 10 light years of earth, and if we go to 20 light years, that number gets cubed. Many of these stars are billions of years older than ours. If there is intelligent life on planets within this distance, they could be billions of years more advanced than us. Billions, with a B.

That’s still pretty far, but we have strong evidence that their spacecraft can accelerate quickly to amazing speeds. Let’s assume they can travel 20 light years at an average speed of 0.1C, or 1/10th the speed of light. That trip would take 200 years.

In 2013, Time magazine ran a cover story… 2045, The Year Man Became Immortal. The article went on to talk about the breakthroughs being made in genetic research relating to aging, and predicted we would be able to bypass the genetic flaws that make us age. Genetic research has accelerated since then, and many now think we will have the ability to be immortal by 2035.

An alien civilization that could be millions, if not billions of years more advanced will have unlocked these secrets long ago. Yeah, 200 years is a long time if you live to be 100, not so long if you live to be 500,000 or more. And there are older stars much closer than 20 light years from earth.

Also, time dilation would make that trip seem much shorter to those aboard.

So OK, space is vast, but that doesn’t begin to rule out the possibility of alien visitation. Sorry, but it just doesn’t.

Science fiction writers like R. A. Heinlein, O. S. Card, E. F. Russell, even Edgar Rice Burroughs have speculated in this area. A really wonderful novel titled “Footfall” by Niven & Pournelle explored many of the possibilities of such a sudden, unexpected clash of civilizations. (I recommend it highly! It’s a fun read.)

But, one serious question just sort of hangs there, unasked: Would we necessarily recognize them, if we met them? They need not look like us, or use anything remotely resembling our technology, or even use the same parts of space we do. That old, dilapidated-looking couch might be a love-seat’s grandpa.

We would not necessarily recognize them, but there’s a good chance we would. There have been records of encounters since we started painting on cave walls, and these were all of beings that were recognized, even if they were misidentified.

Could there also be some sort of extra-dimensional beings that we can’t recognize or detect? Sure, but that seems to be a moot point to me.