Revisiting "Running It Twice" Discussion from 2013

This past week we stayed in a hotel where we watched a game of poker on TV. For the first time we encountered what more seasoned poker players already know about: the option of “running it twice,” as shown in the illustration. Here’s what I’ve learned, all new to me:

Running it twice (sometimes called doing business ) is a method of determining the winner of a poker hand once all betting on the hand is complete but before the final card(s) (or other cards) have been dealt. In practice, this is only done when the hand has gotten down to heads up and one player is all-in and the other player has matched their bet. Running it twice can be done after either the flop or the turn, but can only be done after one of the two players is fully all-in. Both players must agree to run it twice in order for the procedure to be allowed.

It is also possible to run it three times (or, in theory, run it as many times as there are cards available to do so), in which case the pot is split into thirds, and the thirds are awarded using the different sets of final cards.
from https://poker.fandom.com/wiki/Running_it_twice

This seems like it would be great fun! I wonder what others think about this. Have you tried it? Would you try it? There was a very brief conversation on this Forum about it in 2013. Just wanted to bring this back to see what others think.

Seems like fun but I could see collusion coming into play which would be a problem and I like “winner take all” in hold em.

I’ve never heard of this before. It seems to me that the real incentive to do this would be to split the pot so one of them saves him/herself from being broke–which sort of defeats the “no limit, all-in” basis for the game. It might be fun for a railbird to bet on though.

The reason behind this is to reduce variance.

Let’s say you are allin, heads up, as a 3-1 favorite. 25% of the time, you will lose your stack, but if you run it 4 times, you will rarely lose all 4 of them, so you will (usually) both come closer to realizing your actual equity.

I split enough pots running it once thank you.
I’ll take my wins with a smile and my losses like a big baby, but please don’t make me go through it twice!

Yes great, put it on! I will never use it.

I think, maybe, this appeals to me because I like to keep the game going once I’m in it. It’s the end of the game I regret more than the losing (but also the losing).

You should make decisions such that running it any number of times, you won’t mind. Given the amount of bad beats I seem to catch, I’d love to have the option to run hands several times on this site.

I can already see the forum posts: “This algorithm is rigged… I should have won 3 out of 4 runouts, but only won once!”

I remember we had that option at another site I used to play at, and it was kind of fun doing it a few times, even though I find something vaguely distasteful about running it twice, and never do it in live games.

Check out also Double Holdem, it is the game similar to texas holdem but at start u have dealt 3 cards, at the flop before the betting round you choose your main card for example flop is 10 Q 2 rainbow you have K J Q you have to choose main card cause u can at river only use main card and one of 2 left cards, hard choice top pair good kicker or OESD, cant explain the game right, played on partypoker in 2012 year, really liked the game. This running it twice played at pokerstars zoom also good option u have chance to split with your OESD vs set

I love variations! Thanks for sharing this, StudentBluff2!

When running it more than once goes horribly wrong… 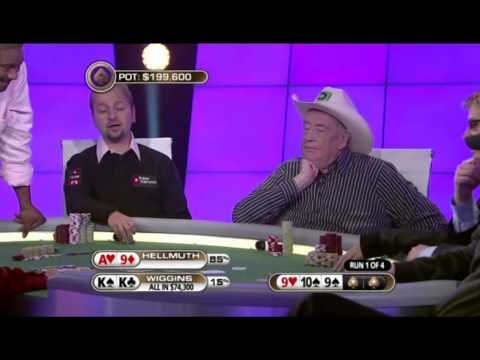 Oh, now that was fun to watch! Poor Phil. They even say “newly reformed Phil Hellmuth” but he ended as pouty as ever, no? You see, though, how that lengthens the game, which is the part I like.

There is just so much to like about you @JanCee, but the silly bit isn’t part of it

Well, it is, sort of, but you know what I mean

Hahahahah!! Heard that before…