I came across this page recently which maintains that “you are more likely to get a Royal Flush than a King-high Straight Flush”.

You are more likely to get a Royal Flush than a King-High Straight Flush!

This naturally seemed intriguing and worth a read. I remain unconvinced however and wondered if anyone else had thoughts on the math used here and whether it is indeed true.

I lost a little confidence in the article when the author states that " There are 4,234 ways to make a Royal Flush from any seven cards" when earlier the author stated there were 4,324 ways, although this could just be a typo.

Any thoughts welcome about the logic/math involved here - certainly interesting for sure!

I read the article and I don’t know how I feel about the data. The author seems to be all over the place with employment in life . I read his bio and it seems impressive but at the bottom of the page is the click to buy him a coffee at $3.00 if you liked his article. That has been proven to be a bottom of the food chain company.

As far as his data I think he just jumped in on the poker space because it’s popular. This is not the authors only article on a plethora of topics and in the end of it he’s asking people to buy him a $3.00 coffee. Seems odd when he sold his company to Microsoft.

I’m going to look more into the data on his hypothesis.

This is his current company so I’m a bit skeptical of the whole idea and data.

DataGeneticsis a BLOG about DataScience, Math, Programming, and General Geekery.

In saying “You’re more likely to get a Royal than a K-high SF”, what we’re actually saying is, “If you’ve made a K-High SF, there’s still two chances (your two other cards) of having the Ace, changing your hand to a Royal. But when holding a Royal, there’s ZERO chance of the other two cards changing your hand.”

So I guess it depends upon how you do your calculations. No doubt there’s a right way and a wrong way, but not being a mathematician, I’m not sure which is which. Either way, I’m going all-in with it!

He didn’t really use any math when making his point. It’s written in a clickbait/infotainment style so I didn’t take it seriously at first.

But I got to thinking about it. Imagine an absurd form of poker where instead of being dealt 7 cards you were dealt 52 and required to make the best 5 card hand you could. You would always have a royal flush and the probability of a K high straight flush would be 0%. If it was 48 cards instead, you would always have a royal flush except in exactly one runout where the 4 aces were not dealt to you, in which case you would have a king high straight flush. Quite rare but not zero. But the probability of quads would be zero. If that trend continues as you reduce the number of cards in a players hand, there should still be a lot of cases when more than 5 cards are dealt where weaker hands are “counterfeited” by stronger cards, making them less likely.

Intuitively it feels wrong but I don’t know why it isn’t. There are exactly 4x(47x46/2)=4234 seven card hands that contain the cards A-T of the same suit. There are 4x(46x45/2)=4150 seven card hands that contain K-9 of the same suit without having the relevant ace. So there are 184 fewer strictly K high SF combos? This makes a royal flush actually the most likely straight flush to make in a 7 card game, since it can’t be “poisoned” as the author put it. Because this makes the Q high SF even rarer, because it can be “poisoned” by either the presence of a suited K or AK in the other two cards. I often make the mistake of double counting combinations into multiple categories when thinking about poker hands, my gut tells me I’ve done the same here but I don’t see how.

I had now an App running, it searched in all 7 of 52 combinations for Straight/Royal Flushs, and the result was this: 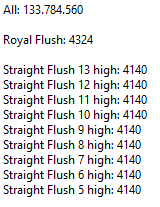 Interesting, but not sure if I could validate. Checking my best hands, I have 9 royals & 1 King high straight flushes and only allowed to see top 10. But I would be happy to get any straight flush. Shooting for number 10, GL to everyone at the tables & Have Lot’s of fun