How to Beat Each Replay NL Hold'em Cash Game Level

I thought I’d start a thread sharing ideas for what might be the most effective ways to beat each level here at Replay. I’ll only look at cash games and no limit hold’em, on 9 max and 6 max tables, and will play at each level for a few hundred hands or so and try to summarize what I think are a few of the more important keys for winning on that level. Others ideas are welcome.

On most tables there are 1 to 4 players that will go all in pre-flop with a pretty wide range of hands, with players that will call with strange hands also. If you find yourself on a table where this isn’t happening much, then the ideas below won’t be as pertinent, but should still be reasonably useful. 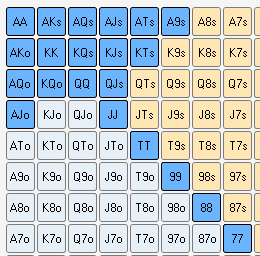 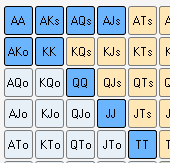 Even though this was the same stakes as Aquarium, I found it played very differently. In particular, it was relatively rare to have players shoving pre-flop on the tables I played at. That said, most tables would see everyone going post flop every hand (though there was one table out of 6 I played on that was a notable exception).

I’ll only look at cash games

There are cash games?

The term “cash game” in this context refers to tables that are not part of any tournament: there is no payout separate from the chips you win in each hand, and the blinds are fixed on a given table.

This level played for me like a cross between Aquarium and Duck Pond. There was more pre-flop all in bets than with Duck Pond, but not quite as much as Aquarium (I did have people go all in pre-flop with 54s, 84o and Q2o, among other surprising selections). Pre-flop I typically raised large (typically 3 to 5 times a normal raise size) with premium hands (99+, AQo+, ATs+, KQs), and if I got a good flop, I’d either go all in on the flop, or if stacks were deep enough, a pot sized bet on the flop and all in on the turn. I’d bluff occasionally, but my value to bluff ratio was quite high. I’d also just limp along with the rest when I had a somewhat reasonable hand, if there hadn’t been too much pre-flop aggression.

The main mistakes I was trying to capitalize on:

Thanks for the information, very usefull
i will follow you’r infos for shure
can i ask you à question ?

Sure, questions are welcome, though I will not have all of the answers. Others thoughts are welcome also, as especially when playing exploitatively there are usually a lot of wildly different approaches that can work quite well.

I was wondering - in your opinion - how realistic is this poker to real money poker – using the higher stakes games and tourneys as a reference - - taking into acct the crazy river and the fact that the chips are free - no real loss - I play with a lot of very good players - in my opinion - yourself included - and have seen some wild calls - just wondering if no cash value has a big impact on these games/calls. Thx

I was wondering - in your opinion - how realistic is this poker to real money poker – using the higher stakes games and tourneys as a reference - - taking into acct the crazy river and the fact that the chips are free - no real loss - I play with a lot of very good players - in my opinion - yourself included - and have seen some wild calls - just wondering if no cash value has a big impact on these games/calls.

I think it certainly changes the mix of mistakes you tend to see, but in both environments, you’ll have players trying to win that are not on tilt, and their play then will be mostly defined based on their knowledge of the game. On the flip side, it is probably a lot easier for people to just be in the mood to do something strange when there is not real money at stake (or at least not as much, assuming that some percentage of the players on the site are buying their chips, and thus those chips have some real money value).

In cash games for real money, there is probably in general a greater tendency for the following two errors:

That said, in live cash games also you’ll find plenty of players that play differently. Here at Replay, moving back more in the direction of this thread, the mistakes most frequently made vary a lot as you move across different stakes:

At all of these levels it is probably easier to make hard calls; you just don’t lose as much when you’re wrong. But that doesn’t always equate to the quality of play being worse, and at times will have the opposite effect (if players are over folding in real money cash games).

*Edit: thought I should add that I think calling tendencies also vary a lot based on what people are used to seeing. I think our Donk tournaments play very differently than all of the cash games, especially as blinds start to climb (I’m still trying to figure out how to best adjust). I think players there are used to seeing a lot more bluffs and a lot more very thin value (or even just equity denial bets), and so in general adjust by calling wider, and I’ve had big bluffs called now on a few occasions with hands like bottom pair on a wet board, which I don’t think I see as much on the cash game tables.

where are these game levels at? duck pond?

All of these are this site, no limit hold’em games. Duck Pond and Aquarium are both 1/2 (small blind of $1 and big blind of $2).

thank you very much for those interesting info, I still have a problem with calling pre flop specialy when i’m starting à tournement, afterwarts when my stack is growing I become a litlle more loose in chosing hands bud still bluffing needs to be worked on…
greetings from the south of France