Hand For Hand On The Bubble

I was just wondering if Replay Poker has ever thought about going Hand for Hand on the money bubble during MTT’s. Often times whenever we hit the money bubble the short stacks will stall until all their time to act runs out and they barley creep into the money.

Using hand for hand would eliminate this problem. Anyone have any thoughts on this?

I agree with you and have suggested this as well.

People are given an amount of time to play, if they wanna use all the time it really shouldnt concern you as you have the same option. Seems like everyone on these forums wants everyone to play the exact same way. All I can say is BORING… If you are gonna play hand for hand at the bubble then you will have to play the whole tourney that way. Now that would be a buzzkill for sure.

Why exactly would that be? Hand for hand dealing at key points is the norm, not the exception, in tournament play, both live and online. It comes into play only at key moments in the tournament, like before the money bubble breaks and before changes in cash tiers. It would probably speed up the play here since players start running clocks out a good ways off from the bubble trying to sneak in.

You obviously don’t get the concept. The only reason it was brought up is because it is the way games are run nearly everywhere but here.

Have a nice night and try to relax a bit. Way too uptight about way too little. If someone is curious about something or wondering why things are different here than what they are used to, what’s the big deal in answering politely with your thoughts rather than being a jerk about it?

Maybe instead of tinkering with the game, create a new tourney format with lightning fast games?

Being a jerk about it? Im expressing my opinion… Whos the jerk here?

Hand for hand is used by all major Poker events like PokerStars and the WSOP. It would only be used on the bubble then after the bubble burst and players are in the money the tournament would play on as normal.

I’m sorry if I misjudged. It sounded like you were being a bit harsh about the inquiry. It has nothing to do with wanting people to play the same way as I do. Its not about going faster or slower. Its about why things are run a bit differently here than they are almost everywhere else. If people are not familiar with the idea, here is a quick link. Again, sorry if I misjudged your intention. 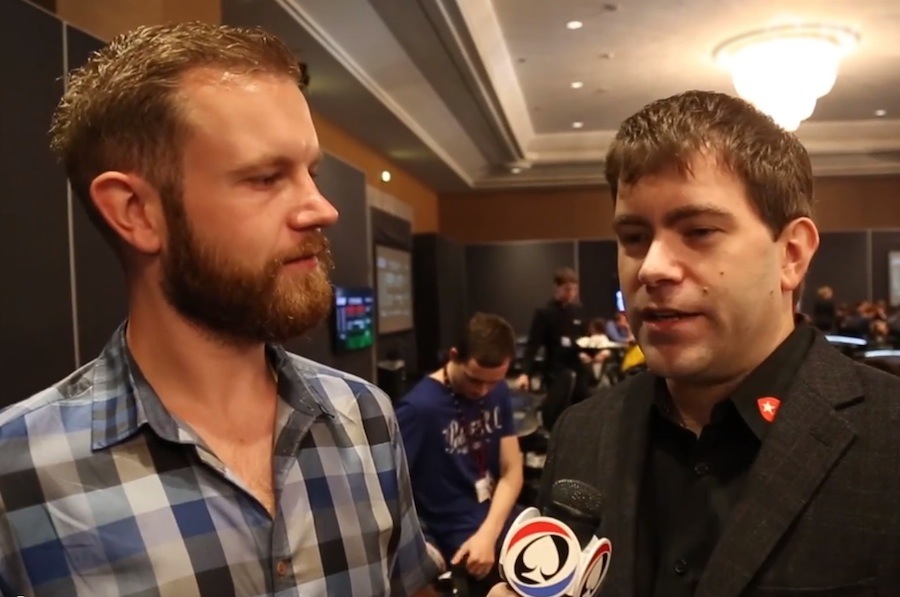 This week's "Talking Poker" discusses "hand-for-hand" play in tournaments with a look back at the crazy bubble at last year's EPT Barcelona Main Event.

I think hand for hand is a good idea, and yes, it is the norm everywhere else.

I wonder why they didn’t just rank them in descending order based on their chips before that hand? It seems to me that would be the fair way to do it.

That’s how I thought it was done too - if 7 players all-in and 5 are eliminated, the player with the shortest stack of the 5 is bubble boy. Then the other 4 are in the money and eliminated in order from 2nd shortest before the hand to largest of the 5. Guess they run it differently there?

Guess they run it differently there?

Yeah, I guess they do. Their problem is an inconsistency in their rules: if 2 people bust on the same table, they go by chip count, but if they are on 2 different tables, they chop the lowest “in the money” payout. Of course, if they chop, neither of them is really the bubble boy.

For that matter, giving bubble boy a guitar and entry into the next tourney means he wasn’t bubble boy either. Bubble boys should get nothing but heartache!

As I see it, when you are in hand for hand mode, it’s basically one big table, at least as far as determining who is the bubble boy. I mean really, what’s the difference if they are on one table or several? Small stack going in should get the shaft and the “bubble boy” title.

100% agree with you. Sounds like they basically made up the ruling on the spot. In this case though, the bubble boy prize was worth about as much as the other 4 spots so who the heck knows? They also paid 239 spots in a 1496 player field, so a lot more generous than most tournaments (16% made the money instead of 10%).

I was bubble boy in 1 moderate buy-in tournament and it was a horrible feeling. About 20 hours of total play for the privilege of being the guy who put everyone left into the money. The worst part was being able to pick out 2-3 mistakes I made in the last ~20-30 hands, including a hand I should have shoved and didn’t. That one would have flopped a full house with at least 2 others involved. Sigh - tried to fold to the cash instead of playing my way there. I didn’t even get a guitar to play the blues on

Been there done that! Being the bubble boy is the worst. I remember playing a tournament and being the short stack at a 9 handed table the blinds were 1,500/2,500 and one hand I was dealt on the bubble I was dealt pocket Kings off suit.

Since I was short I shoved with Kings and one guy calls me with 10’s and hits a 10 on the river making me the bubble boy.

IMO it’s the same argument as the all in maniacs.In any free roll here you have to survive them first and we’re told "hey it’s no limit hold em,“tough ■■■■” . So I see NO difference between that and stallers.It’s part of the game,deal with it.

I am obviously not as learned about poker around the world as most that post here. Im a part time hobbyist of the game. As a novice player, all I am saying is there is nothing wrong with this site outside of a few tourney points issues that I have raised before. I like the game the way it is. Replay puts out a good product and to show my appreciation I have bought chips to support the site. I see lots of posts about adjusting your game to the bingo players, bluffers coiners, time wasters and so on. the response is usually to just adjust your game, it will make you a better player. the minor differences that exist here makes replay unique in my opinion. I wouldnt change a thing, heres an idea… adjust your game, it will make you a better player. lol. Now call me a jerk or vehemently disagree if you like, that is my modest and very sincere opinion.

I vehemently disagree that you are a jerk

Hope we can put that behind us now.

RP puts out an awesome product and I enjoy it a lot. While the system is the way it is, of course I adjust to it. Only irrational people expect the rest of the world to adjust to them. While I may be a bit ill-tempered sometimes, I am not irrational.

Adjusting to the style and format of play here is the name of the game. However, would it be horrible if it was tried out, to make the play on the site more similar to MTT’s played elsewhere? Its not a deal breaker for me, nor I expect for anyone else here, if it stays the way it is. It wouldn’t be a big deal for people who haven’t experienced it before to try it out either.

Whatever game we play and whatever format we play it in, the object is to be the best we can be at it.

GL to you on the tables and off.

So is that not part of the game as the rules are laid out? How about the folks that know they are going to fold just waiting for time to run out rather than physically acting, is that not the same? Players are to use the clock to their advantage or not it is up to them, not you!