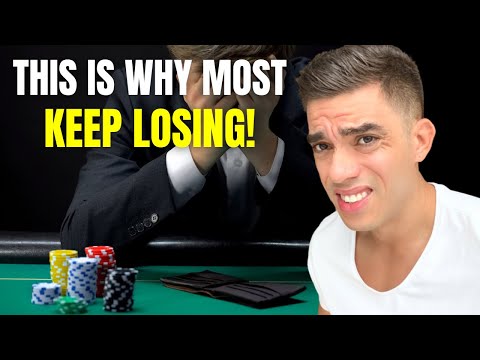 Many don’t let the facts get in the way of their opinions.

I dont think the suite is rigged what i do know though is this …The more I chase the more i lose !!

No limit allows us to alter the pot odds with our bet sizing. Yeah, I agree with the video and all he said, but if your betting game isn’t up to par, this is a huge additional cause of so many bad beats. Make it mathematically incorrect to chase and you profit when they do chase, it’s just that simple.

what i do know though is this …The more I chase the more i lose !!

It’s probably because we’re playing with play chips. People will frequently chase a 4 flush or an open ended str8. So many on here, will even chase an inside str8.

He discussed the betting aspect in other videos. Much of what he says doesn’t apply to Replay, since it’s free chips and so many players never fold, even when they limp every hand. Unfortunately, even at high stakes here on the site, everyone limps. Big bets quite often don’t scare people.

After playing on over half-dozen sites(Pokerstars, Full Tilt, Club WPT, WSOP, etc.) and as someone who pays attention to and participates in table chat, I can say that EVERY SITE, without question, was loaded with people claiming that “that” was rigged. And here is no different, maybe even MORE whining than any other sites, including the few I mentioned. In my opinion, this is just the complaining of those whose game is need of improvement and they’re just using the term as a scapegoat to place blame their on anything before adulting and owning the fact that they’re not very good at admitting that they suffer from inferior skills and not blame it on site after site after site. My never answered question is : How can a site rig a game for a single player? And multiple sites? And…if it’s rigged, aren’t we ALL sitting at that same “rigged” table, so how can you prove it is rigged “for” anyone OR “against” anyone. You can’t, so shut up and keep that word out of the chat and improve your flawed game.

So accurate , your are, SPG…If someone complains because that river card made your straight, then they poorly played the hand by allowing you too see said river card, rather than betting in a way which invokes a fold and NEVER seeing that river they are so quick to don the “river rat” moniker on your head, like an ill-fitting fedora. I’m still trying to understand what compels players to label one a “chaser” when, post flop they have 6 or 7(or more) outs because they flopped a DRAW. When you are calling because you have a legit drawing hand, and opponents don’t use the skills needed to keep you from hitting your str8 or flush, and then immediately use derogatory terms describing you, your mother, and your skillset as inferior…I take that opportunity to get endorsed as a good sport, because calling them idiots won’t work although it is usually spot on.

It happens to the best of them

You can’t stop them from hitting if they are going to hit, but you can make it a mistake to try. This is one of the most fundamental concepts in poker.

Obviously, this example has been simplified and doesn’t include implied odds, but it illustrates the basic concept. It’s not complicated, it’s one of the most fundamental parts of the game.

The objective of winning players is not to win every individual hand, but rather to make mathematically and psychologically better decisions regarding when and how much to bet, raise, call or fold.

Winning poker players work to enhance their opponents’ betting and maximize their own expected gain on each round of betting, to thereby increase their long-term winnings.

Of course the ultimate psychological play is to NOT let other players to get further towards the River and fold.

People on micro stakes real money are not much better especially tournaments, i have seen so many crazy players there just like here. The difference is that people here are more passive most of the time.

The difference is that people here are more passive most of the time.

Passive? Here ? I think not.

Everyone limping preflop is very passive play, and that’s the most common thing you see here.

Is that what he was trying to say ? I took it as players were too timid and passive to throw chips in all the way to the end of the hand and not shove all in which isn’t the case on this site.

Pre-flop it’s very passive, even at high stakes, but post-flop is an entirely different story.

Well players who are on the button (dealer) position do not apply enough aggression here ,

It rarely happens that in 3 ways pot everyone checks around in micro stakes real money games.

Here people play many drawing hand and middle pair hand passively when they are in position which is bad. I noticed that my winnings increase when being more aggressive in position with mediocre hands.

It probably depends on stakes, here on low levels there is way too much passive/loose play at little bit higher stakes people start to play better.