I am for the UK but I can not get over the way Centre Parks decided to close its parks, yes ok they have now decided that people can stay on site and not leave Center Parcs backtracks on Queen's funeral closure plans - BBC News. Staff had said and also customers they would be happy to respect on monday together

Would the Queen want that ? I don’t think she would when people have saved so much money and after COVID got to have a vacation. Transport staff or working to get mourners to pay respects… And yes I get that people who work at Centre parks want to have Monday to pay there own respects. But the Queen and also Churchill back in the day will have wanted nobody to also be at loss and find a way.

I dont know much but I respect The Queen and she is still my Queen she has shown that you hold your head up high, and yes for the non brits trust me a cup of tea does help. Her mum and dad during world war 2 stayed in solidarity at the palace and even before she became queen made her first speech

Princess Elizabeth gave her first address from the drawing room of Windsor Castle as part of the BBC’s Children’s Hour in an attempt to boost public morale. She spoke directly to the children who had been separated from their families as part of the evacuation scheme.

“Thousands of you in this country have had to leave your homes and be separated from your fathers and mothers. My sister Margaret Rose and I feel so much for you, as we know from experience what it means to be away from those you love most of all. To you living in new surroundings, we send a message of true sympathy and at the same time we would like to thank the kind people who have welcomed you to their homes in the country.”

The Queens furneral is on every channel in the United States this morning. I will watch it in its entirety 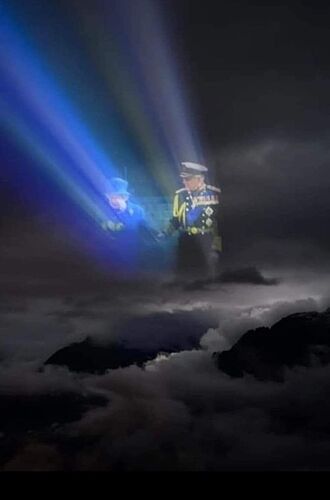