Are there too many times three of the same suit are dealt on the board in Replay Poker?

Not too long a go a player on Replay Poker brought to my attention that there are too many times three or more of the same suit are dealt on the board at this site. This prompted me to test his assertion using the videos I made of me running bad on this site as a sample. This data set seems appropriate because it was drawn prior to the flush issue being brought to my attention and thus isn’t tainted by confirmation bias. It is also a fitting sample because all hands in it contain all five community cards.

My calculations are as follows:

According to the website of Card Player magazine the probability of a board consisting of three of the same suit by the river is 0.23589.

The amount of times three or more cards of the same suit were dealt to the board in my sample is 40.

The difference between the expected mean and sample is 12.16 which is 2.64 (rounded to hundredths) standard deviations.

It’s quite improbable that a randomly selected sample would deviate from the expected result by 2.64 standard deviations by mere chance.

The data is drawn from the hands found in these videos: 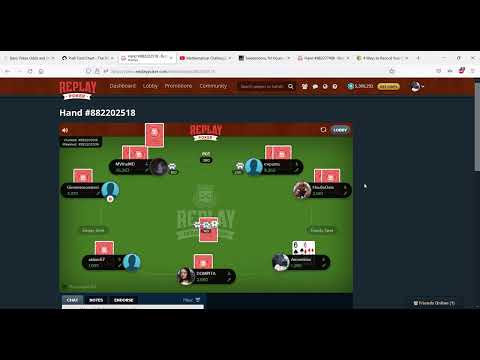 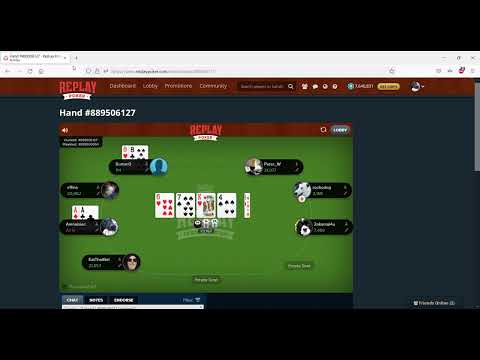 Also on an unrelated note, it seems like the tournament point calculations for Replay Poker may be inaccurate because 1+log10(5000) = 4.69897 and not 4.71 as listed on the website.

My sample consists of 118 hands

The amount of standard deviations from the expected mean is sufficient to warrant further investigation into the matter despite the small sample size.

The probability of the board containing 3 or more cards of the same suit on the river is 37.1%, not 23.6%.
http://people.math.sfu.ca/~alspach/art4.pdf

I guess Card Player magazine’s website is wrong and Brian Alspach is correct.
(see: https://www.cardplayer.com/poker-tools/odds-and-outs )
Look at the bottom of the webpage.

I see it. Looks like they have an error on their site.

I’ll look into it. The one thing that’s certain is both sources can’t be correct.

Too small ! We’ve already seen dozens of these small samples. Some players are already in the midst of doing it so if you don’t feel like doing it or don’t want to we are waiting for results posted in other threads.

Standard deviations take sample size into account. The bigger issue is that the expected probability I used may be inaccurate. I have to resolve the issue of whether the good folks at Card Player are correct, Brian Alspach is correct, or neither are correct in determining the probability of three or more cards of the same suit being dealt out of five total. If Mr. Alspach is correct then my sample would fall within a standard deviation of the expected mean.

Your numbers are incorrect.

Can you be more specific?

Your probability is incorrect and your sample size is too small so it’s misinformation.

Purely anecdotally it does seem to me that single suit flops are more common than one would expect on a Replay Poker.

These hands are annoying, because usually they kill the betting stone dead.

In the early stages of tournaments I find it is usually best to just let these hands go unless you have a draw to the nut flush.

However in the later stages of tournaments, they do make it more worthwhile to limp in with any Ace, because if you have three of a suit on the flop and the Ace of the same suit in your whole cards, you can nearly always make a large semibluff on the flop and not be called by top pair.

Purely anecdotally it does seem to me that single suit flops are more common than one would expect on a Replay Poker.

One note on strategy on this type of flop is that you can make frequent small bets because many people will fold too much.

It seems to me like Mr. Alspach’s math is accurate. I approached the problem by summing the combinations of all boards that don’t have three or more of the same suit. A board where a flush is not possible can have two two card combos of distinct suits or one two card combo of a suit with a remaining rainbow board. The math I used to find the amount of those combos is as follows:

Multiplied by all possible two of four suit combos

Boards with only one suited two card combo and all other cards with distinct suits:

That number is then multiplied by four to represent all suits.

Does my math seem valid and accurate?

Why does Card Player’s website indicate that the probability of a board texture consisting of three or more of the same suit by the river is 0.23589?

i wonder myself, how often i’m looking into 3 cards of the same colour when flops comes…is there a change in probability with 9, 6, or - later in a tounament - 4, 3 or 2 players ?

i wonder myself, how often i’m looking into 3 cards of the same colour when flops comes

The thread name is same suit.

“Are there too many times three of the same suit are dealt…”?

Only when I lose

118 is a small sample size. Strange things can appear to happen with a small sample. Is the dealer software random or not? Need to address this in a more general way.

Just to emphasis your point (and others that have made the same point) - Three cards of the same suite on the flop really stands out - it only takes seeing a few in a cluster to make you think it happens “too many times.” Ah, but once you start actually counting them, things change!

I, just like lovetoeattacos did, did my own count of it when I thought that I was seeing it way too often. Interestingly, in just over my first 100 hands, I had 10 three of the same suit on the flop! Almost 10 percent - close to double the expected 5.18%. However, once I got into the area of 500 hands or so, that percentage had dropped to about 5.3%.

Clusters can happen over short term - but it’s just a cluster and you can’t read anything into it.