Growing up, Most of us had our favorite Amusement / Theme parks. For me that was a theme park called Canobie Lake Park located in New Hampshire.(As seen in the above photo I took a few years ago.) As a kid we would go there every summer. Though in my teenage years I haven’t been there as much and the last time I was there was back in 2016.

They would usally open around the end of April and would stay open until Halloween. They had this fun Haunted House type theme for Halloween called ‘ScreamFest’ There would also been weekly fireworks show starting on the 4th of July and running until Labor Day weekend.

They had some great rides and games as well as a water theme park that would open one hour earlier before the rest of the park opened.

I’m hoping to be able to go back again sometime this summer. What’s favorite amusement / theme park that you’ve been too?

I absolutely loved Universal Studios in Hollywood. I haven’t been there for a long time. I chose that park as the place to celebrate my 40th birthday, which seemed so old to me then, so young to me now. My parents traveled a long distance to join us, and I pulled my son out of school for the day. It was great fun–the ET and Back to the Future rides especially. (They were new then, so now you can guess my age.) We all loved getting a behind the scenes look at the sets for our favorite movies. Wheeee! Good memory, Marc–and great hat!

I’ve been to the Universal Studios in Florida once in 2013 and it was a great time! I went with my cousins who at that time I hadn’t seen since 2008 and was in Florida for a family vacation. We went on a ton of rides and I couldn’t believe how big the park was.

We also went and saw a magic show and my favorite rides were a Jurassic Park water ride, The Hulk Roller Coaster and a 3D Spider Man ride. It was a great day and had a lot of fun!

image1024×768 215 KB
This is the Nemesis ride at Alton Towers theme park. I am afraid I was too “chicken” to try it, but the park has an amazing atmosphere and I contented myself with the less scary rides and enjoyed the water park, together with the unexpectedly tranquil areas. They used to have an aerial ride which took you for a birds eye view of the park, but that no longer operates. Unless you were lucky and hit a quieter day I seem to remember spending longer in the ride queues than on the actual rides themselves!
2 Likes
SunPowerGuru May 20, 2020, 8:13pm #5

My favorite park is Cedar Point in Ohio. If you are a roller coaster enthusiast like I am, this is the park for you. They have more coasters than any other park. A few of my favs are…

Gemini: a twin track wooden frame coaster. The 2 trains run of separate tracks and race, and they sometimes run one of the trains backwards, as in, facing the wrong direction.

Rougarou: Once they strap you in, the floor is removed. Having no floor adds to the sensation of speed.

GateKeeper: This one sets 7 world records. You don’t sit over the track, or even under it, you sit on arms sticking out from the side. The first “wing over” drop is a 180 degree inversion at 67 mph and happens at 170 feet in the air. Good stuff, that.

Iron Dragon: The cars are suspended below the track, and are free to swing side to side. It’s a good ride, with lots of twists and turns to fling you around this way and that,

Maverick: The first launcher takes you to a drop that is actually steeper than straight up and down… it drops under the starting point. Lots of negative G “risers” have you floating off your seat, then 2 - 360 corkscrews in a row, but in opposite directions. Then into a dark tunnel where a second launcher winds you up to 70 mph in 3 seconds for some more fun.

They have other coasters; a classic out and back, a looper, a corkscrew, and so on, but those are my favorites. If you love coasters, go there!

SunPower,
Those rides you outlined, sound like some real PUKERS!

Back in the day, I would sometimes do coaster conventions, either with ACE (American Coaster Enthusiasts) or with the Western New York Coaster Club. They would often blitz 6 parks in 3 days, just riding the coasters. We would get at least 2 hours of exclusive ride time, where they closed the coasters except to the convention, so no lines.

During this period, I started the tradition of taking my first ride on any new coaster blindfolded from the first seat. Great fun, that!

Oh, and never hang on under any circumstances, not even if you are about to fall out. Hands in the air… always!

I love Roller Coasters!!! One of my favorite Roller Coasters is called Untamed located at my local amusement park Canobie Lake Park. Below is video of the ride I found on YouTube. 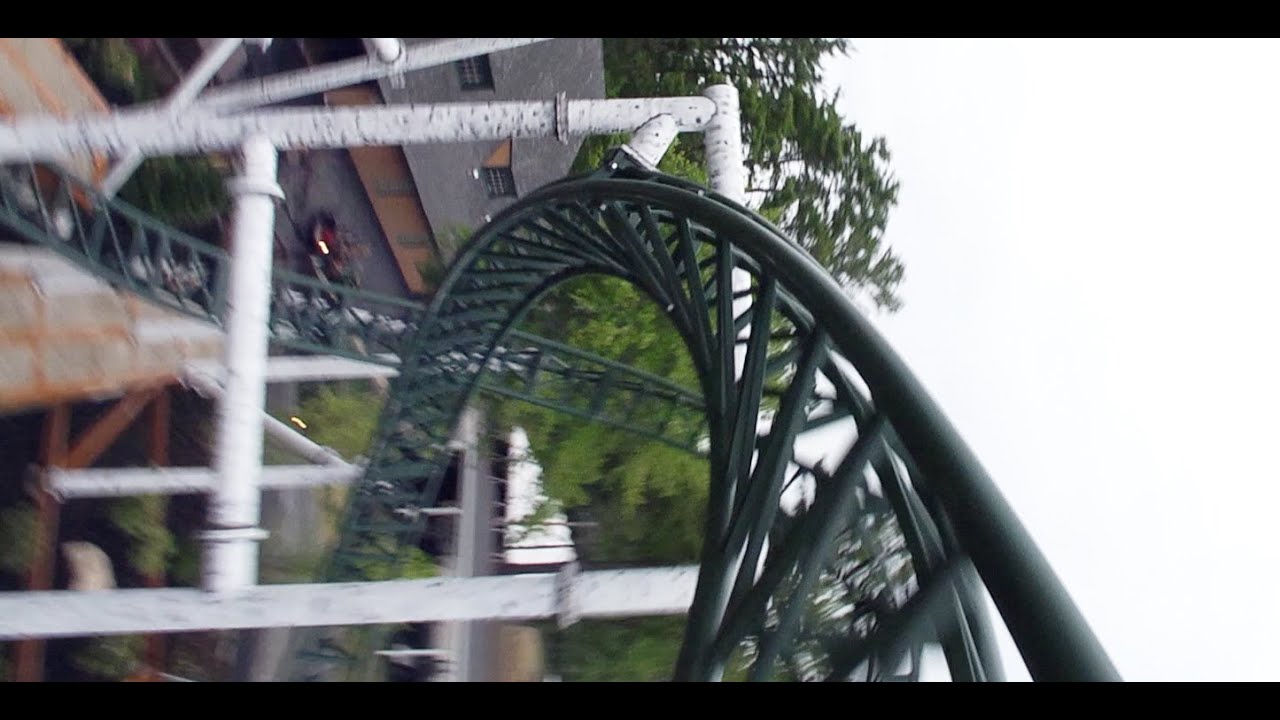 It’s a short ride but it’s a thriller! Especially if your sitting in the front row. I always try to get a front seat. I’ve been on it many times!

My favorite coaster was the Comet at the now-closed Crystal Beach park in Ontario. This was a brutal old school coaster that I would describe as sadistic. It was only about a 90 foot first drop, but the flimsy steel structure groaned and swayed, and the ride was jerky and intense. It would lift you up out of your seat cresting hills, then slam you into a hard turn, then crunch you down to the floor in the next valley. Bruised ribs and chipped teeth must have been common because they had a nurse station at the exit.

I first rode it during a convention, and they didn’t want to close it for our exclusive ride time, so they agreed to let us have our time after hours. They also agreed to let us ride with all the lights out… in total darkness. This is what gave me the idea to ride new coasters blindfolded.

They also invited us to come back and help with spring break in. The trains sit over the winter, and the grease gets gunked up. The first few rides in the spring were done with park staff and volunteers. They have to run with the lap bars up, because the trains sometimes can’t make it over the next hill. When this happens, you all jump out onto a narrow catwalk, push the train the rest of the way, then jump back in as it starts down! Great fun, that! Hahaha

not for the faint of heart…

Been there, rode that. I also saw a home movie taken from the ground of that coaster. Some idiot was standing up at the top of the lift hill, waving to his family. He got slapped in the head by the sign that said, “Remain seated,” which was right over the track. This knocked him out of the car and he plunged to his death. If I remember correctly, he landed on the track and the train ran him over, though the film I saw didn’t show that because of the angles.

My favorite non-coaster park was Action Park in NJ. This has been called the most dangerous park in the world, and with good reason. You were in control (or out of control) if every ride in the park. To make it even better, they had “refreshment” stands so you could grab a few gin and tonics while waiting in line.

The local hospitals called this place “traction park,” and the park itself had to buy several ambulances to keep up with the volume of injuries.

Some of my favorite rides there were the Kamikaze, which was the highest, fastest water slide in the world, the alpine slide, and the speedboats.

The alpine slide was a concrete bobsled run that you went down in little plastic sleds. Each had a lever… push it forwards to raise yourself up on wheels, neutral had you sliding on nylon runners, and you pulled it back to apply a rubber break pad. Some of the hairpin turns were steeply banked, some weren’t. It was very easy to fly off the track, and if you did, there was usually a tree or 2 to stop you.

The spedboats were about 6 feet long, and featured 60 HP engines. You semi-controlled them with a little butterfly steering wheel that had a throttle paddle on one side. Hit the gas and you take off, the nose lifting so high you can’t see a thing. Let go of the throttle too fast, and the nose dives down, swamping you and sinking the boat instantly. Wooohooo!

They even built a looping water slide. You climbed this platform, flung yourself into a big wet tube, and sometimes made it all the way around the loop. This was only open for about a month, so I never got the chance to try it. The safety officials closed it down because of all the head injuries it caused.

My crew and I would go once a year, usually on a Saturday. Most of us were able to walk again by the following Tuesday. Good times!

OK, I found this, which will give you some idea of the thrills and terrors of Action Park… 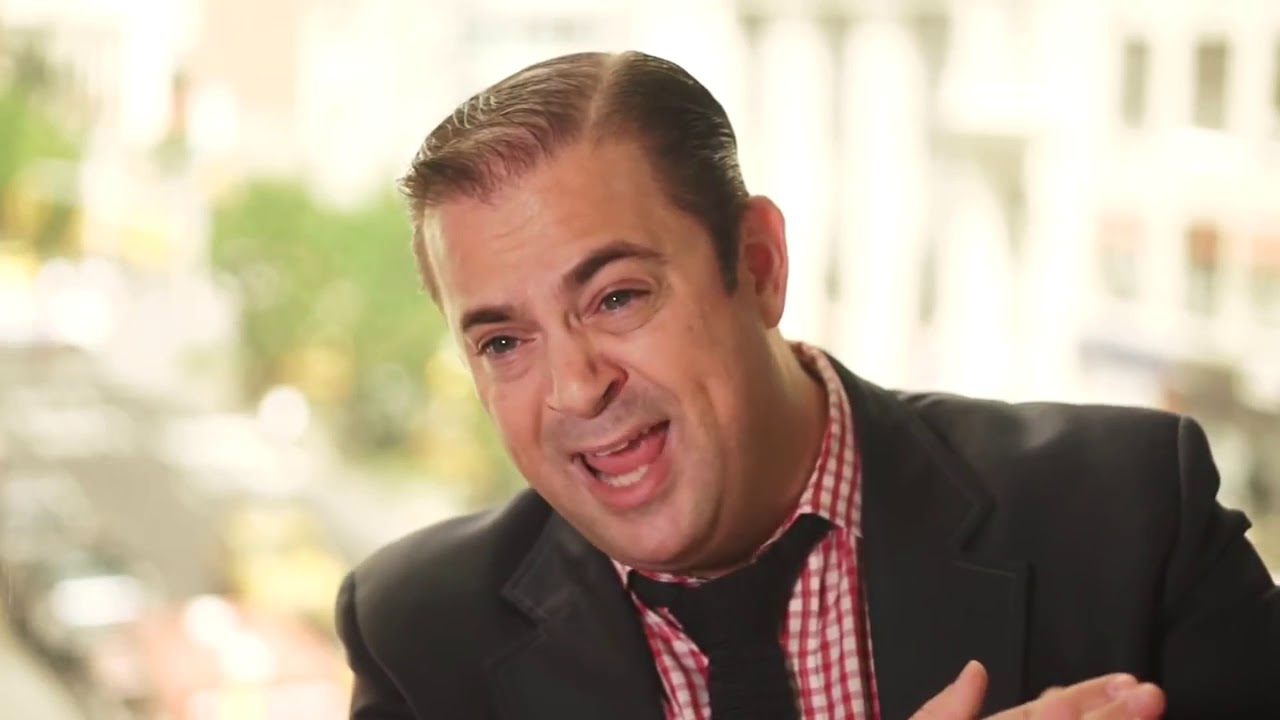 Santa Cruz beach and boardwalk. Back in the 70’s they had these danged cages that one or two of your drunkest friends could step into and try to work together to swing them up and over in a 369 degree loop. Fun times.

Oh yeah, and the Giant Dipper… 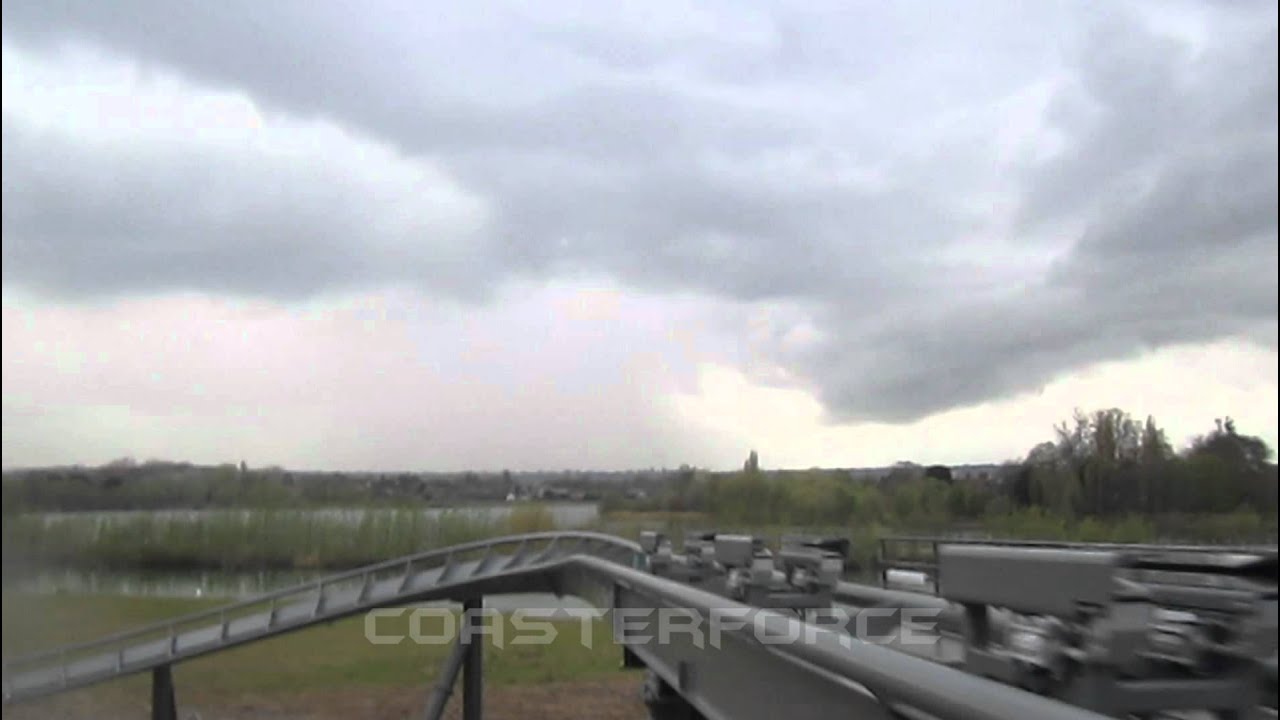 Thorpe Park , London
the swarm was my favourite ride - video does not do it justice !

Grew up about a 40-minute drive (before traffic jams) from Knott’s Berry Farm. I was too old to enjoy this ride without being sick the rest of the day, but appreciated the delight it gave my son and his friends. Montezuma’s Revenge!

Are you an extreme thrill junkie? Montezooma's Revenge launches riders from 0 to 55mph in just 3 seconds! Take a ride and get your revenge.

I worked at theme parks for many years – I did an internship at Walt Disney World, then ended up working at Universal Orlando for quite a while. I’m still very fond of both. The world-building in those parks is simply second to none (ok, second to Tokyo DisneySea), so I have a hard time going to regional amusement parks.

I am not much of a coasterhead, but a strange hobby of mine is that I really enjoy learning about them. I learned about Action Park, which @SunPowerGuru mentioned earlier, through one of my favorite YouTube series - Defunctland. I highly recommend that show if you want to learn about why rides/parks didn’t make it and were shut down or changed. 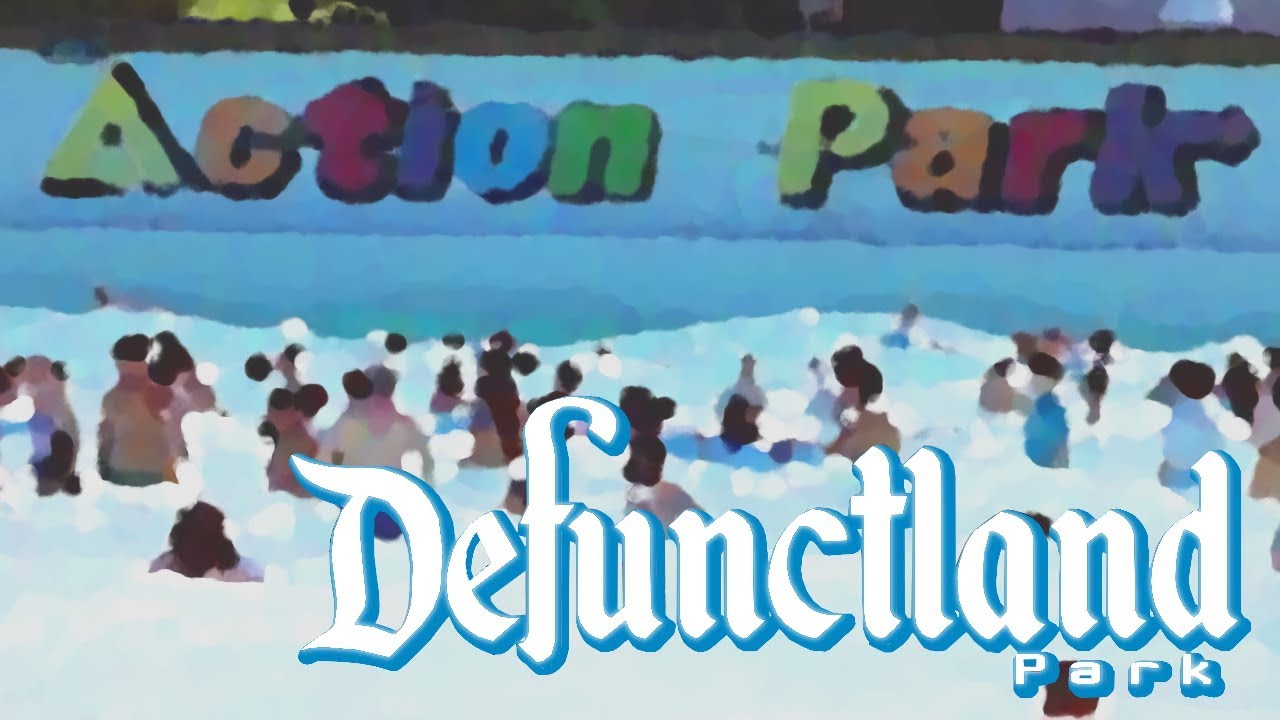 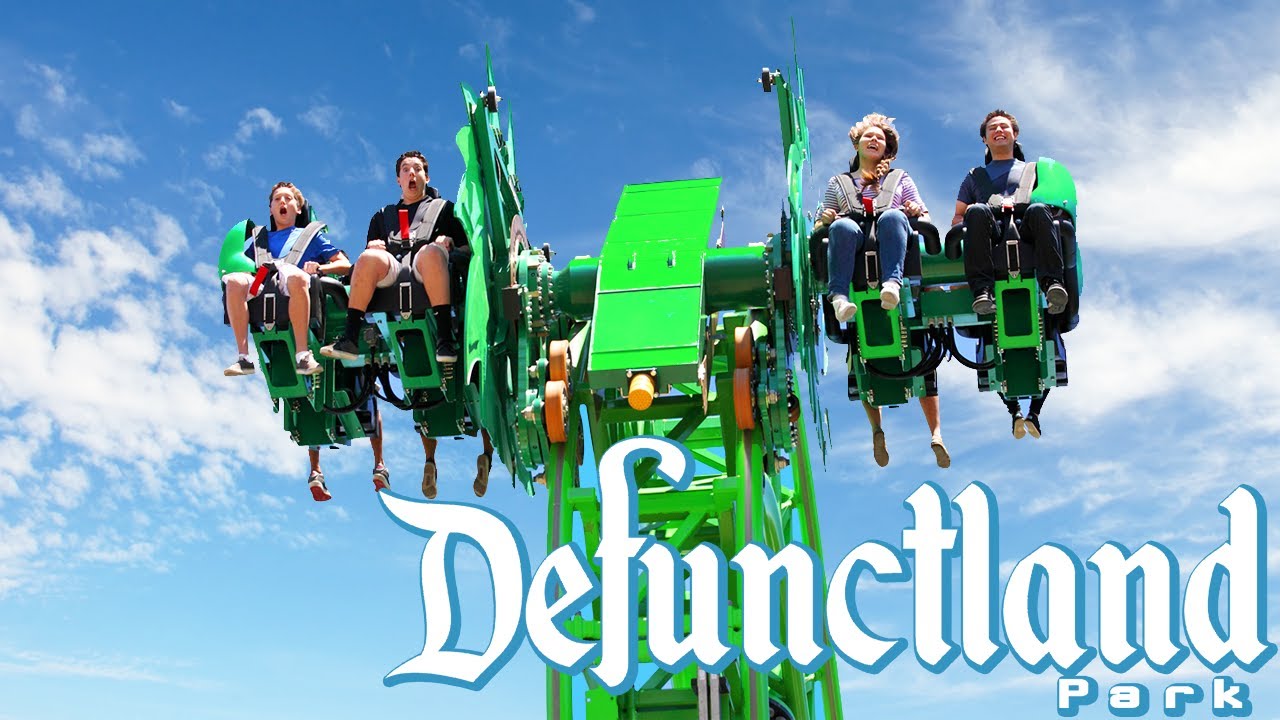 Thanks Fizzy. I did come across that video after I had already posted the other, and it does a much better job of explaining. Still, it’s clear that the narrator/writer has never been there. There are several errors in that video. For example,. the 10 lanes of Surf Hill were rated “mild to wild” in numerical order. 9 and 10 were much more extreme than lane 7 he mentioned. Maybe 7 was wild and they fixed it before I started going there, so who knows.

I loved that park. My crew and I did everything to make each ride even more dangerous than it already was. We utterly ignored every safety rule, and nobody stopped us or even tried. The dangers have been exaggerated over time. If we survived it, it couldn’t have been that bad. We came home limping and slightly battered, but it was worth every bit of the pain.